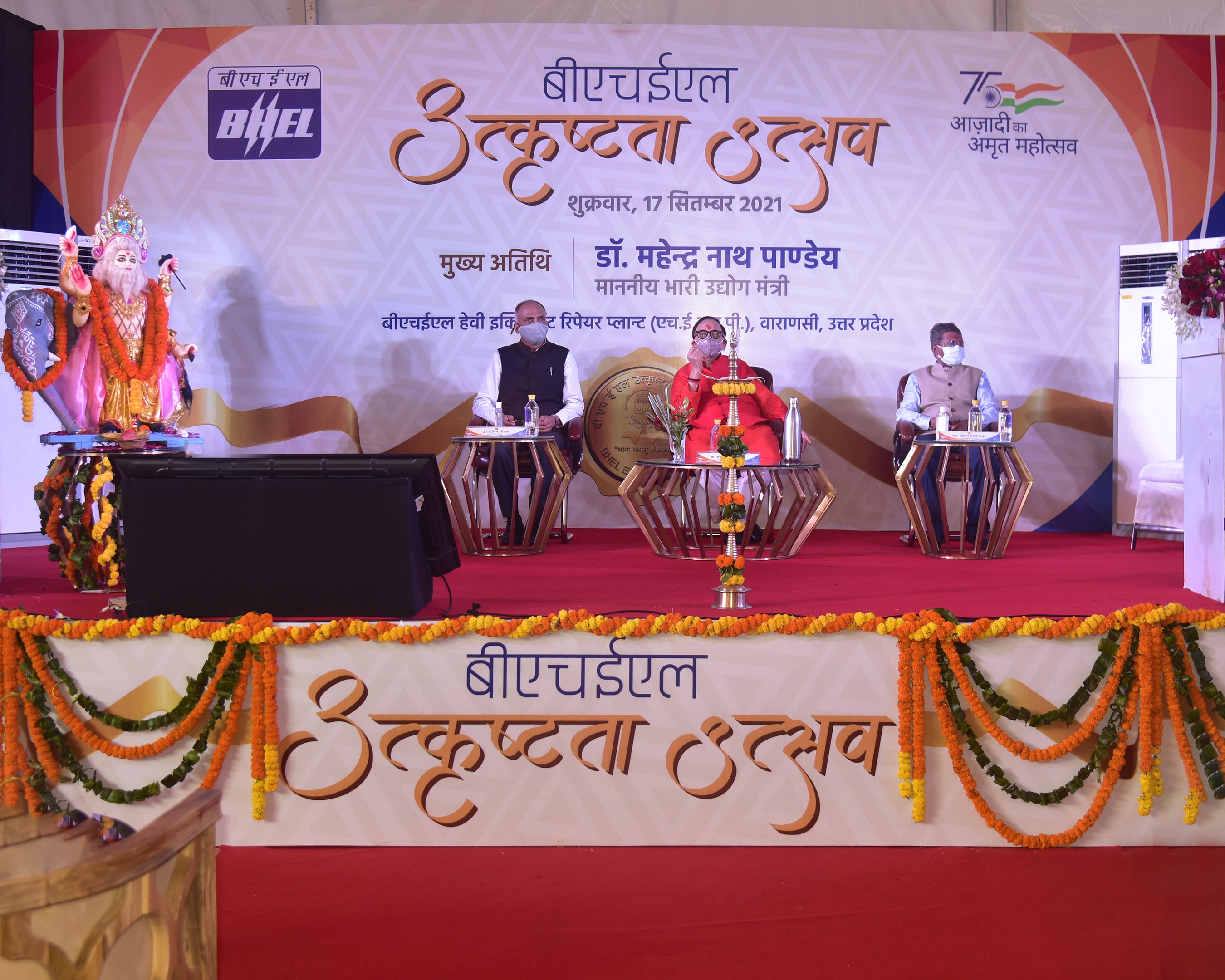 Varanasi, September 17: Bharat Heavy Electricals Limited (BHEL) celebrated its annual Utkrishthta Utsav with great fervour, where the company’s ‘Excel Awards’ were conferred on meritorious employees. Dr. Mahendra Nath Pandey, Hon’ble Union Minister of Heavy Industries graced the occasion as the Chief Guest and presented the awards in a glittering ceremony. Dr. Nalin Shinghal, Chairman & Managing Director, BHEL, Directors on the Board of BHEL, and other senior BHEL officials were present on the occasion. All the manufacturing units, divisions and offices of the company were connected live to the event through Video Conferencing.

Dr. Pandey gave away Excel awards to 12 teams comprising 65 employees (including 3 women employees) from various units of BHEL. The awards included, Utkrishthta Puraskar - for all round excellence; Utkrisht Takniki Prakashan Puraskar - for publishing Technical Paper/ Booklet/ Book, Anusandhan Puraskar - for Research & Development, Grahak Santushti Puraskar - for Customer Satisfaction, Utpadakata Puraskar - for enhancement of Productivity, Pratibaddhata Puraskar - for recognizing exemplary commitment to work under adverse critical conditions, and Samaj Seva Puraskar - for outstanding contribution to Society. The Hon’ble Minister also participated in the Vishwakarma Puja on the Shop-floor of the manufacturing plant on the occasion of Vishwakarma Diwas.

Addressing the gathering, the Hon’ble Minister said that BHEL has always risen to the occasion and demonstrated its commitment towards various programs of the Government, whether it was by regularly imparting technical training to apprentices under the ‘Skill India Mission’ or by helping realise the vision of ‘AatmaNirbhar Bharat’ under the ‘Make in India’ initiative.

Dr. Pandey said that the Hon’ble Prime Minister has outlined the strengthening of five pillars under ‘AatmaNirbhar Bharat’ namely Economy, Infrastructure, System, Demography and Demand, and BHEL can play an important role in that. This is the 75th year of our independence and BHEL’s active presence and wholehearted participation in this ‘Azadi ka Amrit Mahotsav’ is assured. In addition to national security, it is our responsibility to focus on the environment and strengthen ourselves in the area of clean energy. In this direction, I appreciate the contribution being made by BHEL in the area of developing non-conventional sources of energy.

The Minister also lauded BHEL’s achievements towards realizing the ‘Make in India – Make for the World’ mission of the Hon’ble Prime Minister aimed at enhancing international relations and exports.

BHEL’s Excel Awards scheme is a unique PSU award scheme open to all employees in the company. The awards are given to recognize all-round excellence and contribution made by employees for the company's growth, profitability, customer satisfaction and Technological Development in addition to exemplary achievements made in sports, social or cultural work, etc. The award amount ranges from Rs.50,000/- to Rs.2,50,000/- for each team with a host of privileges for the awardees. The scheme has a rigorous internal screening process and the awardees are selected by an external jury.